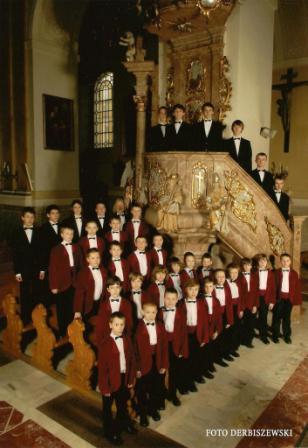 The Choir of the Kalisz Basilica is the direct heir of the male-voice "Echo" choir, founded at the turn of the years 1891/1892. Within the space of over a hundered years' acitvity, the choir was connected not only with concerts in many cities in Poland (ex. Bydgoszcz, Częstochowa, Gliwice, Gniezno, Iwonicz, Jastrzębie Zdrój, Kamień Pomorski, Katowice, Kalisz churches (today's St. Joseph Basilica, St. Nicolas-the present cathedral and Fathers Franciscans') but also with secular craft associations. In 1929 the first Singing Society "Kalisz Echo" was registered in Kalisz and in 1937 it was turned into the "Echo" Singing Society in Kalisz. .

In the two decades betweenthe world wars, the choir performed successfully on catholic and secular ceremonies, it won laurels on various singing meetings. The post-war years were very hard for the "Echo" choir singers. Within the space of the '50s and the '60s the choir tried to refer to the glorious tradition from before the wars but later on its activity was limited to the participation in mass and other church ceremonies.

In 1987 Marek Łakomy became the conductor of the choir. He introduced significant changes to the choir: he changed the repertoire, raised the performance level. In 1993, on the initiative of the Association's Patron - the St. Joseph Sanctuary curator, priest prelate Lucjan Andrzejczak, a boys' choir "Schola Vocalis" was founded. 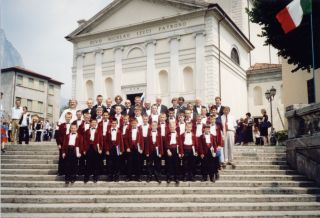 However, the breakthrough in the singing tradition of our parish was the year 1997 when yet another formal legal registration was made for the "Echo" Singing Association in Kalisz. The organizational and financial functions were separated from the artistic functions. The boys' and men's choir of the Kalisz Basilica became the musical showcase of "Echo". The choir's artistic manager and conductor was Marek Łakomy. The Patron, Carer and Father of many choir's undertakings since September 2001 was priest prelat Lucjan Andrzejczak. Since 2000 the group is a member of the International "Pueri Cantores" Association. At present priest prelate dr Jacek Plota is responsible for the group.

The most important achievements of the choir: